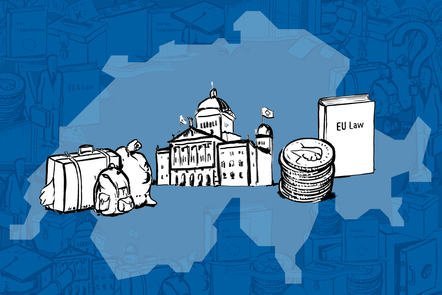 In times of economic uncertainty and increasing migration within Europe, the relationship between Switzerland and the European Union (EU) is severely tested. Located in the west of the European continent, Switzerland is a small but wealthy country, which is surprisingly not a member of the EU. Did you ever wonder what the reasons for this are? And have you ever thought about what legal conditions govern this exceptional relationship?

In this free online course, we will attempt to answer some key questions, including:

Learn to distinguish fact from myth

This course offers a legal and political look at the position of Switzerland in Europe and its challenges as a non-Member State of the EU. We will put a particular focus on much debated and sometimes misunderstood issues such as corporate taxation, banking secrecy and the debate about curbing immigration. With this in mind, you will be able to reflect on Switzerland, the EU and regional integration on a differentiated basis.

Expand your knowledge through case studies

In addition to case studies on ‘money’ and ‘migration’, we will also discuss the negotiations between Switzerland and the EU on the institutional framework of the Swiss-EU legal relationship. Studying the case of Switzerland from different angles will not only further your legal knowledge but also sharpen your awareness of the high degree of interconnectedness of countries in the modern world. After this course you should be able to apply your knowledge in other contexts - for example, when assessing news about regional integration in Europe or elsewhere.

The only thing you need to bring to the course is an interest for legal, political and social issues. You do not need to have a prior knowledge of law to profit from this course. The course addresses non-professionals as well as people working in politics or administration - for example, in the EU, the EEA and Switzerland, further journalists and law students, in particular, but not only, those specialising in EU and international law.

Start your review of Switzerland in Europe: Money, Migration and Other Difficult Matters