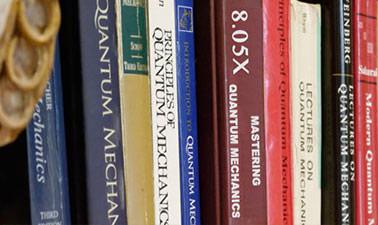 The first part reviews the basics of wave mechanics and introduces the variational principle. It then moves on to develop the technology of spin one-half states and spin operators. The last part of the module gives an in-depth look into linear algebra to establish the mathematical foundation necessary to do quantum mechanics. The module concludes by developing the bra-ket notation of Dirac.

The second part covers Heisenberg’s uncertainty principle and the concept of compatible operators. It continues to develop the Heisenberg and the Schrödinger pictures of quantum mechanics. The module also covers the coherent and squeezed states of the harmonic oscillator. It concludes with two state systems and their applications to NMR and masers.

This course follows MIT’s on campus 8.05, the second semester of the three-course sequence on undergraduate quantum mechanics, and will be equally rigorous. 8.05 is a signature course in MIT's physics program and a keystone in the education of physics majors.

Before starting, you will need some basic familiarity with quantum mechanics. You must have seen the Schrodinger equation and studied its solutions for the square well potential, the harmonic oscillator, and the hydrogen atom. You may have learned this by self-study or by taking an introductory one-quarter or one-semester course on the subject. You must be proficient in calculus and have some knowledge of linear algebra.

Completing the course provides the necessary foundation to pursue advanced study or research at the graduate level in areas related to quantum mechanics.

To master this course you will likely need a time investment of at least 12 hours a week.

4.9 rating, based on 8 Class Central reviews